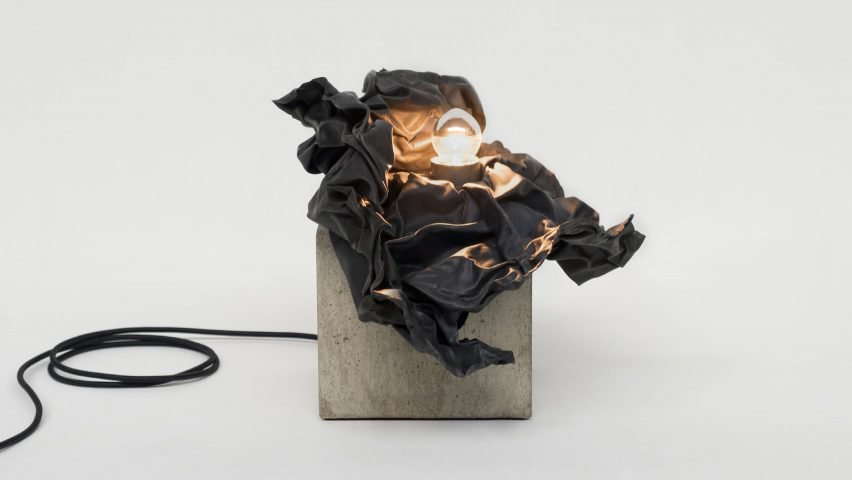 No two works are the same in JamesPlumb’s new lighting collection, which features crumpled sheets of lead that sit on top of cubed concrete bases.

The London-based studio designed the series of handmade lamps as part of their Studies in Permanence collection, which they devised as a rejection of the  “conventional perfection” that comes with mass-produced objects.

Each lamp features a blocky concrete base, a bulb, and a crumpled piece of lead that has been sculpted by hand.

“We are drawn to objects that cannot be replicated, and to the idea that total permanence cannot be,” the duo told Dezeen.

“In these works, no two pieces of lead will ever be the same shape – it’s this guided unpredictability by the human hand that excites us.”

Each piece of lead was individually patinaed to create unique shades. The duo then rolled the material out into sheets, making it more malleable for sculpting.

This also gives the lead a thin and lightweight appearance, despite it being around four times heavier than its concrete counterpart.

The shadows cast from the bulb is intended to emphasize the differences in two materials – the complex forms emitted from the lead is set against the simple block of shadow from the concrete.

“The lead partly takes on its own personality and agenda, and in these works, we observe and respond to this fluidity,” the designers told Dezeen. “A blend of carefully considered shaping by design, and accidental incident as the lead takes its own paths and folds.”

JamesPlumb’s Studies in Permanence collection reflects the artistic background of both the designers, who studied fine art sculpture at the Wimbledon School of Art.

The collection also includes a sculptural bench, which was showcased by Gallery FUMI and was one of Dezeen’s top picks from the PAD design fair in London earlier this month.