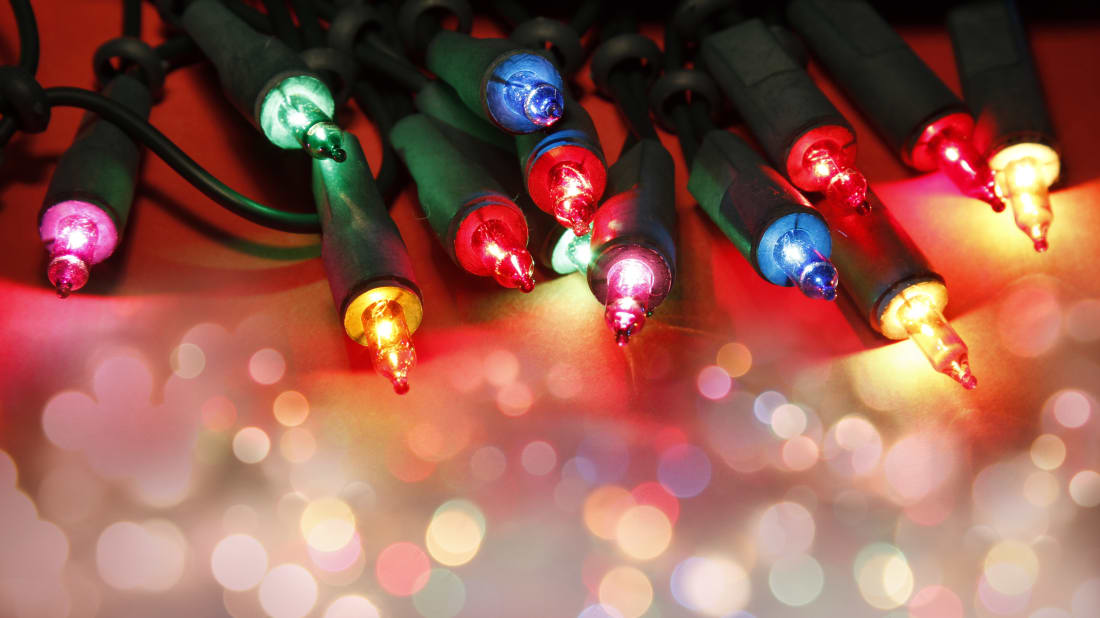 As Christmas approaches, millions of Americans will begin the annual tradition of pulling tangled snarls of lights out of their closets and draping them over roofs, across walls, and through the boughs of trees. The 135-year history of how these mass-produced novelty lights became a holiday fixture is a distinctly American Christmas tale.

Americans have lit up Christmas trees since the early 19th century—long before the invention of the modern light bulb. In those days, families would decorate trees in their living rooms and then attach burning candles to the branches. Unsurprisingly, this created a serious fire hazard. For safety reasons, families would gather around to light the candles one time each year for at most an hour, usually while standing by with pails of water and bags of sand to douse the flames if the display got out of hand. Still, accidents were so routine that by 1908, a group of American insurers began refusing to pay claims related to Christmas tree fires.

In 1879, Thomas Edison had just perfected the world’s first practical light bulb and was in the middle of an all-out media blitz to bring attention to his new product. On New Year’s Eve, he drew thousands of people to his laboratory in Menlo Park, New Jersey, where, according to Forbes, he showed off his new invention with “a live outdoor display with dozens of incandescent lamps strung together”—what some call the world’s first string lights.

But Christmas and strings of electric light wouldn’t be tied together for three more years. On December 22, 1882, Edward H. Johnson—an impressively mustachioed inventor and vice president at the Edison Electric Light Company—set up a holiday-themed display in his Manhattan home to demonstrate the beauty of electric light: 80 twinkling red, white, and blue bulbs strung between the boughs of a large Christmas tree, which he mounted on a rotating platform in his living room.

A reporter from the Detroit Post & Tribune could barely contain his enthusiasm for the “fantastic tree with its starry fruit” and the novel lights “encased in these dainty glass eggs”—his old-timey way of describing the multicolored bulbs. “One could hardly imagine anything prettier,” he wrote.

The publicity stunt caught the country’s attention, and by 1890 General Electric had begun manufacturing electric Christmas lights. But in the early years, only the rich could afford them. To install the lights, you needed to buy a generator or battery to provide power, and then you needed to pay a trained “wireman” to individually wire each bulb. Decorating a house could cost as much as $300—about $9000 today. According to a dissertation on Christmas lights by Kerri Dean, the expensive lights became the “rage amongst the wealthy,” and “Christmas tree parties to show off the expensive electric lighted tree became exciting social events for children of high society.”

As technology improved, Christmas lights got cheaper and safer. The early versions burned so hot they could still cause fires, but technological advances began making the bulbs safer. In 1903, department stores began carrying pre-wired strings of eight lights for a hefty $12, more than $300 in today’s dollars. Families who couldn’t afford to buy a string of lights outright could rent one for the season for $1.50—about $40 today. By 1914, a string of lights cost just $1.75, and by the ‘20s Christmas lights were affordable for most Americans.

The White House played a major role in promoting the new trend nationally. In 1894, Grover Cleveland became the first president to celebrate Christmas with electric lights, likely to impress his two young daughters. The tree, according to The Wheeling Register, was “very beautifully trimmed and decorated with tiny parti-colored electric lamps in place of the old-time wax candles.” Cleveland’s display featured 100 multicolored bulbs—but it was dwarfed by Calvin Coolidge’s extravaganza of 3000 lights on Christmas of 1923.

But the Christmas light tradition owes most of its success to electric companies, who saw the holiday trend as an opportunity to sell lighting products. An undated pamphlet titled “All the World’s a Stage at Christmas and All the People on it are Lighting Prospects” pushed the idea that holiday light displays were the industry’s best sales pitch. “The world at Christmas time is the background for a gay, spectacular extravaganza,” the pamphlet declared, and on the Christmas stage “there are quantities of lamps to be sold, Christmas lighting equipment, wiring. There are kilowatt-hours to be sold. Lighting this stage is profitable business for the electrical industry.”

Just a few years after Coolidge’s tree, the Christmas light industry crowned its first king: the NOMA Electric Company, which would dominate the world of Christmas lights until the 1960s. Its founder, Albert Sadacca, picked an unfortunate time to start a novelty lighting business. But the Christmas light industry weathered the financial storm of the Great Depression through an aggressive advertising campaign that appealed to family, country, and “the importance of a properly celebrated Christmas in trying times such as these.” One 1930 ad in the Saturday Evening Post featured a little boy writing a letter that read “Dear Santy, Please come to our hous this time becos we have it lit up now so you can’t miss it enny more.” A 1932 NOMA catalogue assured that their designs “look right to the American eye” and “fit in with an American Christmas.”

The ad campaign worked, and the 1930s became a renaissance for funky Christmas light designs. NOMA produced lights in the shape of clowns, witches, and Santa Claus. Over the years, light designs changed with American taste. The ‘40s saw a craze of Bubble Lites, shaped like the candles families used to light their trees with. The heat from the bulb in each light would boil a liquid inside the candle-shaped plastic mold, causing the lights to flicker like real flame.

In the ‘60s, the Christmas light industry looked on in dismay as Americans fell in love with aluminum trees, which are unfortunately good conductors of electricity. Faulty Christmas lights could charge aluminum trees with electricity and zap the next person to touch a branch. Since traditional string lights were potentially lethal on a metal tree, families switched to rotating color wheels instead. This, combined with stiff competition from foreign manufacturers, led NOMA to file for bankruptcy in 1966.

The classic mini light design—the familiar incandescent lights in tubular-shaped bulbs that come on perpetually tangled green wires—was first sold in 1970. They’ve dominated the Christmas light market until the recent rise of LED lights, which use between 80 and 90 percent less electricity and can cost 1 to 2 percent as much to power.

While Christmas tree lights have taken many forms over the past 135 years, the tradition of dragging a dead tree into our living room and setting it aglow has remained a strange fixture of American culture. Just thank Edward H. Johnson for cutting your risk of lighting your house on fire this year.

By continuing to browse or clicking 'Accept', you agree to the storing of cookies on your device to enhance your site experience and for analytical purposes. To learn more about how we use cookies, please see our, cookies policy.